Transporting water to the area vulnerable to droughts

Artery to irrigate the northern strip along the Kinokawa River

Now, the northern bank of the Kinokawa River is one of the greatest farming areas in Wakayama Prefecture with a number of rice fields spreading over the area. However, the area used to suffer from droughts frequently as the expression “dried by moonlight” represented its poor water resources. Its turning point was when the Odai Irrigation Channel was developed in the Edo Period. In order to build an artery to supply water from the Kinokawa River to the farmland in its northern bank, large-scale civil engineering works were conducted in the area which now covers from Hashimoto City to Iwade City.

Transporting water to the area vulnerable to droughts

Development of the river terrace

There are some reasons why the northern bank of the Kinokawa River, from Hashimoto City to Wakayama City, had been vulnerable to droughts. As the area is a river terrace created by the flow of the river, its altitude was too high to withdraw water directly from the river. In addition, the amount of water supplied from reservoirs was not enough to meet the demand. In order to solve this issue, the development of irrigation channels utilizing the rich water resource of the river was started in the 1700s. The first irrigation channel constructed in 1700 was the Fujisakii Irrigation Channel, which has an intake in Fujisakii (Fujisaki, Kinokawa City) and withdraws water up to the eastern area of Wakayama City. Ordered by the domain lord, Ohata Saizo, also known as “the god of river management”, led this project. In 1707, the construction of the Odai Irrigation Channel was initiated. The first phase of the construction, which covered the area from Koyaguchi-cho, Hashimoto City to Nateichiba, Kinokawa City, was completed in less than one year. The intake of the channel is located in Oda, Koyaguchi-cho, further upstream than Fujisakii, and the construction project faced many engineering difficulties to tackle complex topographical features.

Completion, renovation and the following years

By the completion of the Odai Irrigation Channel, rice fields of approximately 1035 ha were newly developed. To irrigate such a large area, the facilities of the Odai Irrigation Channel were repeatedly renovated after the completion.
To get through complex topography of the river terrace, the aqueduct bridges were adopted in the channel. These bridges were originally made with wooden elevated flumes, but they were renovated into arch bridges with brick and stone pitching in the 1910s. The aqueduct bridges such as Tatsuno Toi and Koniwatani River Toi still remain as they were, and continue to transport water from the Kinokawa River.
As the Odai Irrigation Channel withdraws water from the Kinokawa River, the largest river in the Kii Peninsula, the channel was sometimes damaged by floods.
In 1909, Odai Weir, which was used as an intake, was washed away due to the swollen river. Temporary works to restore the weir were recorded in the documentary photographs

Tatsuno Toi, which used to be a wooden aqueduct bridge, was renovated with brick and stone pitching in the 1910s to adopt a modern structure.

Support for agriculture in Wakayama

All about the Odai Irrigation Channel

Instrument to determine the levelness

To withdraw water of the Kinokawa River from its upstream, the gradient of the irrigation channel needed to be as low as possible. Therefore, the instrument called “mizumoriki”, which was handmade by Ohata Saizo, was adopted to determine the levelness using water. Thanks to accurate surveys, the channel with a very low gradient was realized. 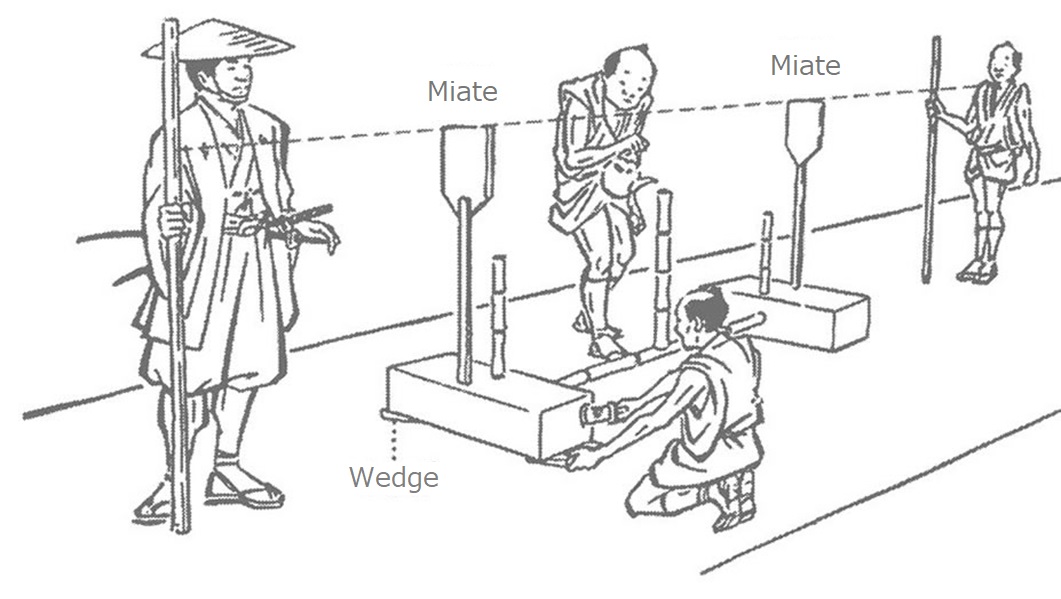 This instrument was used to determine the levelness by pouring water into the central bamboo and checking how water flowed out of the bamboos attached to the both ends. * Fork Museum located in Sugimura Park, Hashimoto City exhibits the instruments used at the time.

Cutting-edge technology of the Edo Period

The river terrace in the northern part of Wakayama Prefecture has many valleys made by smaller rivers. To construct the channel with a low gradient through these valleys, “fusekoshi (siphons)” and “toi (aqueduct bridges)” were constructed. Fusekoshi is a method to run water under the bottom of the river. Toi is a bridge to run water above the river, and it was originally made with a wooden flume. In particular, the construction of Tatsuno Toi over the Anabushi River was difficult because the river needed to be spanned by a 21-meter long flume without any bridge pier. The Odai Irrigation Channel has eight aqueduct bridges and nine siphons. 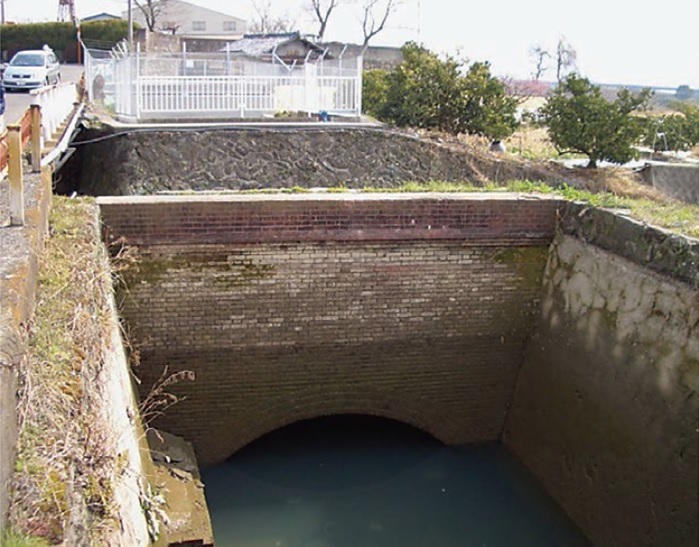 Fusekoshi (siphons), which enabled the channel to run under the bottom of the river, were adopted to cope with rivers flowing through the terrace. This is a photograph of Nakatani River Sluice. 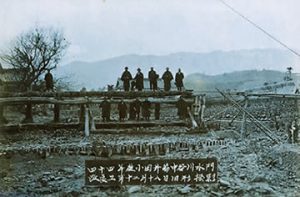 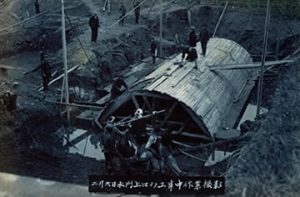 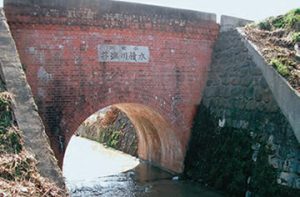 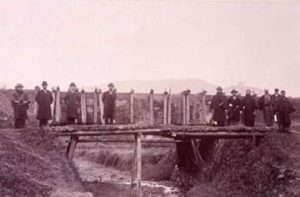 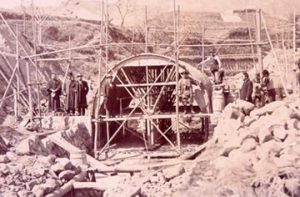 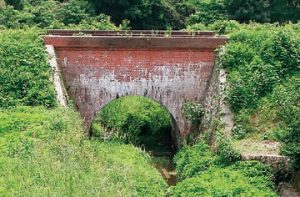 The Odai Irrigation Channel has a low gradient with a height difference of 1 m per 3-5 km. In addition, the channel was initially constructed with earth. Therefore, water sometimes did not reach to the end of the channel due to water leakage or other factors. Moreover, the weir used as an intake was constructed with wood and stone, and it was washed away every time a flood occurred. It required a lot of efforts to restore the lost weir.
The channel and the aqueduct bridges were renovated in the modern times. However, it was 1957 that the weir was renovated to the current structure as a part of the recovery project for the major flood which occurred in 1953. Since then, the weir has remained in the same location and played an important role as the start point of the channel.

Handing down the history of Odai to the next generation 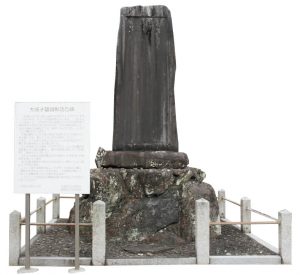 Saizo was born as a son of a farming family in Kamuro Village, and took over his father to become a village headman. In 1696, he was appointed as a civil engineering officer by a Kishu Domain officer Izawa Yasobee Tamenaga. From this year, he worked on the construction of the Fujisakii Irrigation Channel, and started constructing the Odai Irrigation Channel in 1707. According to the materials such as “Saizo Nikki (Saizo’s Diary)”, “Mizumoricho (Record of Leveling)” and “Zakkicho (Record of Miscellaneous Affairs)”, Saizo was an officer good at calculations and skilled in practical operations of agricultural administration. As shown by the fact that he remained to be a lower-level officer until his retirement, he is considered to have a persona as a village headman who devoted himself to the service of the farmers.